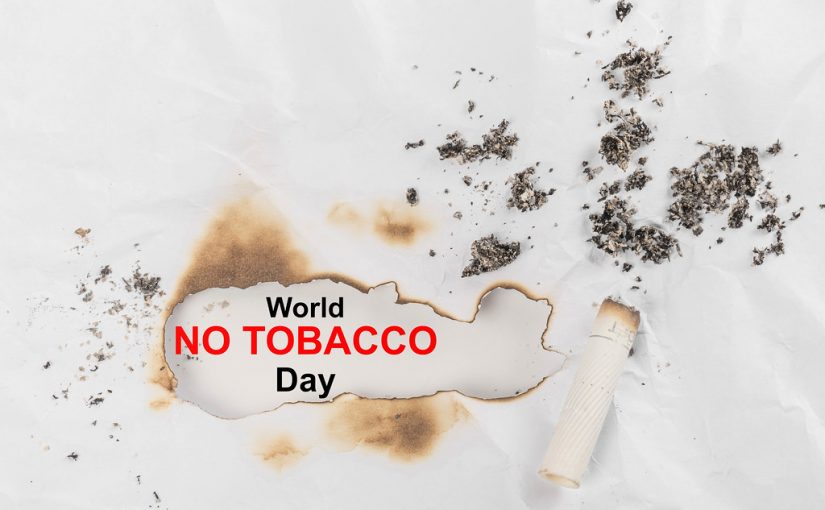 The annual World No Tobacco Day campaign (May 31) provides an opportunity to raise awareness about tobacco’s harmful and deadly consequences. This annual event educates the public about the dangers of smoking, tobacco companies, and what people all over the world can do to assert their right to health and a healthy lifestyle while also protecting future generations.

This year World No Tobacco Day 2022 has a strong campaign message about how tobacco is poisoning our planet and how we can save it. Government Organization and the public health sector are focused to spread awareness that tobacco and its waste is harming nature and are the reason for the destruction of mother earth.

Tobacco use has long been recognized as a significant risk factor for oral and other cancers. Poisonous chemicals are found in all tobacco products, including cigarettes, cigars, pipe tobacco, chewing tobacco, and snuff (toxins) Cancer-causing substances (carcinogens) Nicotine is a highly addictive drug.

Thousands of substances enter your lungs when you inhale cigarette smoke. Many of these substances can harm your lung cells’ DNA. Your body will try to repair the harm caused by these chemicals, but smoking might cause more damage than your body can repair over time. This could eventually result in the creation of cancer cells.

Tobacco smoke can also harm your lungs’ alveoli, which are little air sacs. The gas exchange in your respiratory system is centered on these small air sacs. When you inhale, they transfer oxygen into your blood and exhale, they move carbon dioxide out.

Each type of tobacco has been related to an increased risk of certain cancers. There are at least 70 compounds in cigarette, cigar, and pipe smoke that can cause cancer. When you inhale the smoke, the chemicals enter your bloodstream, where they are carried to all regions of your body.

Many of these chemicals can harm your DNA, which determines how your body generates new cells and how each type of cell does what it was designed to do. Damaged DNA can cause cells to grow differently than they should. These atypical cells have the potential to develop into cancer.

Smokeless tobacco products, such as dipping and chewing tobacco cause cancer, too, including cancers of the esophagus, mouth, throat, and pancreas.

Chewing (spit) tobacco, wet snuff, snus (a “spitless,” moist powder tobacco, frequently in a pouch), and other tobacco-containing items that are not smoked are all examples of smokeless tobacco.

Although certain smokeless tobacco products contain fewer hazardous chemicals than tobacco smoke, it can still lead to mouth cancer from chewing smokeless tobacco. They’re also exposed to over 25 substances that have been linked to cancer.

Tobacco-specific nitrosamines are the most cancer-causing chemicals in smokeless tobacco (TSNAs). The amount of TSNA in a product varies, but the higher the level, the higher the cancer risk.

Smoking causes cancer and then makes it difficult for your body to fight it.

Toxins in tobacco smoke can damage the immune system, making it more difficult to eliminate cancer cells. When this happens, cancer cells continue to grow unabated.

Tobacco smoke contains poisons that can harm or modify a cell’s DNA. DNA serves as a cell’s “instruction manual,” guiding its normal growth and function. When a cell’s DNA is broken, it can grow out of control and become a cancer tumor.

Most lung cancers are caused by smoking. It is well evident that smoking cigarettes or being exposed to secondhand smoke causes roughly 9 out of 10 lung cancer mortality. Secondhand smoke is a mixture of smoke from a cigarette’s burning end and smoke exhaled by someone who is smoking.

Smoking alters your lungs and airways significantly. Some changes are sudden and only last a short time. Colds and pneumonia are good examples. Other, more chronic abnormalities take a long time to develop and can last a lifetime. Smoking damages your airways and the little air sacs (alveoli) in your lungs, which can lead to lung disease. COPD, which encompasses emphysema and chronic bronchitis, is one of the lung diseases induced by smoking.

The lungs become inflamed and irritated when you smoke. Even a single cigarette can irritate the throat and cause coughing.

Smoking can also cause lung and lung tissue damage. As a result, the number of air gaps and blood arteries in the lungs diminishes, resulting in less oxygen reaching vital body regions.

The lungs are lined by cilia, which are broom-like hairs that clean the lungs. Cilia slow down in movement a few seconds after you lit a cigarette. Even one cigarette can cause your cilia to slow down for several hours. Smoking also affects the number of cilia in your lungs, reducing their ability to clean the organ adequately.

The majority of lung cancer cases are caused by cigarette smoking.  If you have asthma, tobacco smoke can cause or exacerbate an attack. Smokers are 12 to 13 times more likely than nonsmokers to die from COPD.

Quitting smoking or tobacco-related products can improve many aspects of your health in addition to lowering your chance of lung cancer. Some of the potential advantages of stopping smoking include:

Your body will begin to heal itself quickly after you stop smoking, and the sooner you quit, the better your health will be. Quitting smoking lowers blood pressure, lowers your risk of stroke and coronary heart disease, and lowers your risk of lung cancer. Some of these changes can take years to manifest, while others can happen as quickly as 24 hours after your last cigarette.

The most important thing you can do to avoid cancer caused by smoking is to quit smoking if you already do. Secondhand smoke should also be avoided. Cancers of the lung, larynx, oral cavity and pharynx, esophagus, pancreas, bladder, stomach, colon, rectum, liver, cervix, kidney, and acute myeloid leukemia are all reduced by quitting smoking (AML).

There is no such safe amount of cigarette consumption. People who use tobacco products of any kind are actively encouraged to quit. People who quit smoking, regardless of age, have a significantly longer lifespan than those who continue to smoke. Quitting smoking before a cancer diagnosis also lowers the risk of mortality.

In earlier times, Lung cancer was a very uncommon disease. However, as more people began to smoke, lung cancer prevalence has risen.

Lung cancer does not affect everyone who smokes, but it does increase your chances dramatically. People who smoke are 15 to 30 times more likely than non-smokers to develop lung cancer. The longer and more frequently you smoke, the greater your risk.

Tobacco smoke contains over 7,000 different compounds. Many are poisonous, including arsenic, radioactive polonium-20, mercury, and other carcinogens that cause cancer in humans and animals.

Smokeless tobacco products can potentially cause cancer. Tobacco dipping and chewing are two of them. Second-Hand inhalation of other people’s smoke can cause cancer. Quitting smoking or chewing tobacco-related work lowers your odds of getting any of the cancers linked to smoking.

What is it in tobacco that can cause cancer?

Tobacco smoke contains a variety of carcinogen compounds, including nicotine and tar which is an addictive substance (the addictive drug that produces the effects in the brain that people are looking for) that collects in the lungs when you breathe in cigarette smoke.

What causes cancer in cigarettes?

Cigarette smoke contains chemicals that harm DNA. The chemicals in cigarettes make it more difficult for cells to repair DNA damage. They also harm the sections of our DNA that guard against cancer. Cancer is caused by the accumulation of DNA damage in the same cell over time.

Does tobacco cause cancer?

How does smoking affect your lungs?

Smoking damages your airways and the little air sacs (alveoli) in your lungs, which can lead to lung disease. COPD, which encompasses emphysema and chronic bronchitis, is one of the lung diseases induced by smoking. The majority of lung cancer cases are caused by cigarette smoking.